Trace pricing and my indecision over what to do next

When I first heard about Trace Lofts a year ago I didn’t get too excited about it. Who would want to live at 12th and Madison? At the time all the night life action was further west on the Pike-Pine corridor. Now a year later the 12th and Madison area has Havana and will be home to the new Cha-Cha and the Gun Club. Things are looking up and so my interest has changed. As I found out more and more about Trace Lofts I got more and more excited. Unfortunately when it came time to get a reservation appointment I was ninth! Going into my appointment not knowing much about the pricing except their large price ranges my unit choices were:

Sadly when I got there #201 and #301 were already gone. Fortunately my first two picks were available but the really sad news was that when I learned of the narrower price ranges #502 was likely going to be $770/sq ft and #402 was likely going to be $690/sq ft. I left having reserved #502. I then IM’d with my (Redfin) agent and we spent the night looking at comps (I literally did not sleep that night.) Turns out very few units have ever sold on Capitol Hill for over $600/sq ft. Granted, Trace is pretty cool, but there are some pretty cool condos in that small neighborhood around Trace. Consider there is 1310 Union, the Firehouse and the Monique Lofts. A little further away you find Pike Lofts, 615 E Pike, the Crawford and even Brix further up the street. Several of these places have had re-sales in the last month sub-$500/sq ft. Why would I pay a $200/square foot premium considering that Trace was going to be ready this summer?

Considering this I got cold feet and backed out of #502. At $690/sq ft #402 wasn’t any better. At $585/sq ft #301 was somewhat reasonably priced but was long gone (along with #201) before even my first appointment. I then weighed the options between #303, 722 square feet at an estimated $520/sq ft and #408, 769 square feet at an estimated $617/sq ft. #303 was a better value, was west facing which is what I really wanted (though it’s unclear how much of a view the 3rd floor will have) but the floor plan wasn’t as spacious as #408 and lacked the 160 square foot terrace that 408 sported (though I’m worried the terrace wall will be too high and obscure the view of Rainer, etc while sitting on the couch.) In the end I went with 408. If I’m going to live somewhere long term I reasoned that I really needed a deck so I can grill and enjoy the outdoors. Now though I’m wishing I took the cheaper unit.

A month later I’m still not feeling confident in my decision even as others have gone and reserved units I thought were way over priced. My agent is also waging a campaign to get me to back out of Trace and today we went and looked at #101 at The Crawford. $525,000 for 1100 square foot and a hot tub within feet of Linda’s, Capitol Club and the Chapel? Hard to say no but it has no view at all and felt much too dark. I love my views. It is likely going to be bid up to $550,000 and I’d really like to stay below $600,000 though I almost broke that rule at Trace.

And so I continue to be torn. I’d really like to live at Trace but it feels over priced.

To confirm this I compiled the chart below by building a spreadsheet of all the units, their square footage and their price ranges. For some units I had estimates on what the price would be based on discussions with the Trace real estate agents during my reservation appointments. 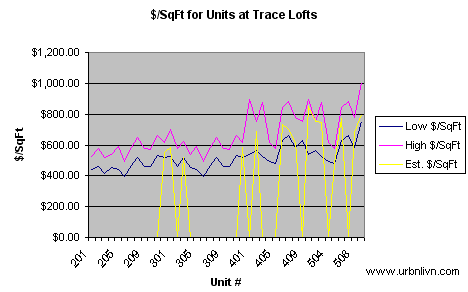 So with the sub prime lending market collapse, wicked re-sales continuing to pop up (i.e. Merrill Place) and a lot of inventory on the horizon why should I lock myself in? Why not wait until Trace Lofts, Trace North, Mosler Lofts and Rollin are built and then have my pick of those four buildings plus the left over inventory from 2200, Olive 8 and Cosmo? Even better, why not rent a nice top floor west facing unit at Trace North for likely less than it would cost me in mortgage+HOA+tax? Perhaps I can do much better in the stock market using leverage to buy undervalued stocks.

I know the majority of people likely base their decisions on feel much like I did at Meritage. Now with so much money on the line I’m approaching things much more analytically, perhaps too much so. I’d love to here your thoughts on how you’re handling your next purchase. Do you build intricate spreadsheets, spend hours on HouseMath and run a website just so you can have a better handle on market dynamics? :)