To celebrate the opening of their new head quarters architecture firm Weber Thompson held an open house this afternoon and I swung by to check it out.

What’s Weber Thompson done that you’d recognize? On Capitol Hill Weber Thompson is known as the architects for Murray Franklyn’s often discussed Pine and Belmont condos. Other condos they’ve worked on are 1521 (Aubry has a recent post with a photo from the topping off ceremony and reports there are 5 units left), Madison Tower, Cristalla, Ava, Bagley Lofts and the list goes on.

For those following the construction and issues online with their building blog the open house was a great opportunity to see the green building in action and find out more about the systems they have in place. Most notably there is no air conditioning, a ton of windows that open, interesting window covering systems, exterior staircase, open concept work spaces and interesting details. The building was built by RAFN who also did the Trace project.

I loved the building and would enjoy working there though I highly value private offices and all they had were a sea of cubes. Many of the employees sounded excited about the new space though a few people had a hint of hesitation in their voices but I was unable to tease out what was holding them back on embracing their cool new space. 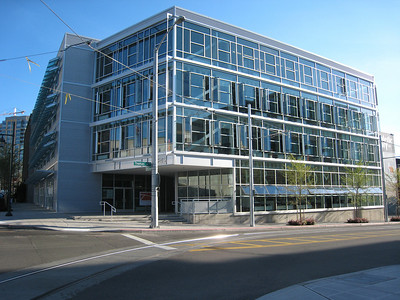 In their lobby they have salvaged wood from the warehouse that was there before that was used by Pearl Jam: 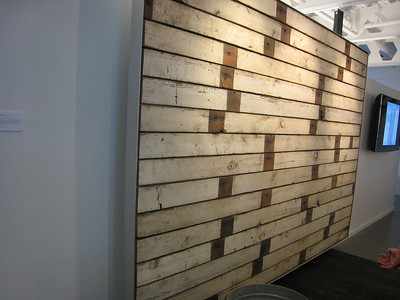 Unfortunately Blaine Weber wasn’t there as he was at a design review for 2nd and Virgina.

View the rest of my bad photos or check out the photos James took.

And no, I didn’t rummage around and steal any renderings for unannounced projects, though it was certainly tempting :).