A Trip to Veer Lofts

There’s no better way to spend a rainy day than checking out real estate.

Our first stop was to Veer Lofts. This weekend was Veer’s “opening weekend.” The first units closed three weeks ago and now about 15 units have moved in. They’re currently at 56% sold of 99 units. The just under a million dollars penthouse sold last week. 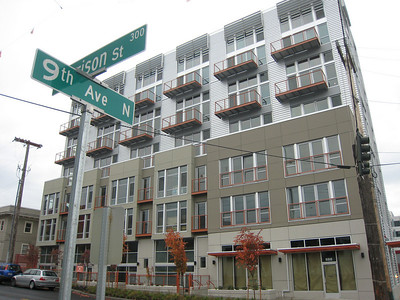 Unfortunately Vulcan doesn’t allow photography of their sales center or buildings so I have no photos to post. If you’re a recent Veer Lofts purchaser please send us some pictures! Or invite us over :).

Photography silliness aside I really like how the full loft units turned out. One of the reasons they look so much better than the flexi’s is that the full’s have a different kitchen finish package. The flexi/flat finish package has the laminate banana/counters that I really don’t like. I did notice that the drywall job in some units didn’t look that great. But I was glad to see that they included light junction boxes on the ceiling. They also aren’t including window coverings so people will be shocked to find out how much it costs to get window coverings.

#606, an east facing unit. 1075 s.f. at $640,000: The east facing units have a great view of Lake Union. Unfortunately you know it’s going to in two to five years, but in the meantime, it’s great. It has a balcony plus two zen gardens that you crawl out a window to. Perfect for nude sunbathing on those rare sunny days in the summer. Or for growing a private collection of… I didn’t like how the staircase in this one was right in the middle of the unit though.

The also have one flat left and a bunch of flexi’s. One of the flexi’s we looked at had a huge downstairs if you didn’t mind the four and half foot high ceiling in the flex space. The flexi’s start in the upper $300’s and go to mid $400’s.

Keep in mind that at Veer Lofts you can’t rent out your unit for 18 months and no re-sales for nine.

Update: Thanks to readers for sending him some photos. Here’s one of a flexi: 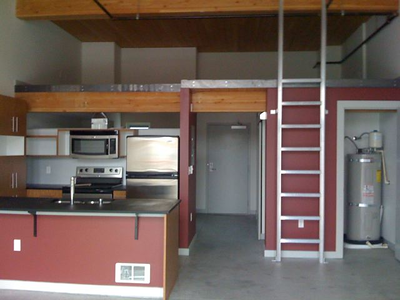