I really have to see if I can get a tour of those Four Seasons condos.

Rates for the new hotel begin at $365 per night, and range up to the presidential suite, which rents for $5,000 a night. The new hotel includes the Art Restaurant and Lounge.

Update: Kate’s doing PR for Fran’s Chocolates who just opened a 1,100 square foot shop at the Four Seasons today. She sent in some photos of the shop including this, dare I say, slightly creepy, mosaic made of truffles: 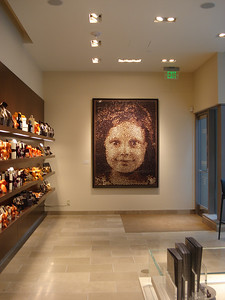 Update 3: James managed to get the tour and has lots of photos of the model unit.

Live the Luxe Life at the Four Seasons