Tonight on the way home I swung by the broker’s open for Eleven Eleven at, wait for it, 1111 E Pike. It’s a 27 unit building developed by Anne Michelson on Capitol Hill designed by Tom Kundig. 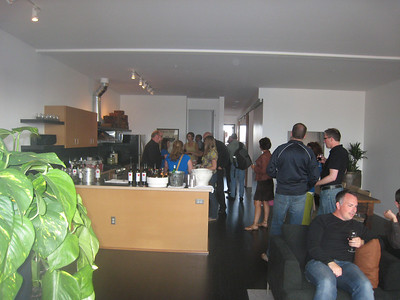 Tom Kundig, the architect, in case you don’t know, is a big deal. I hear that there was a line out the door thirty minutes before the party started. Maybe they were there to see Tom (he was only going to be there for the first hour. Guess he had other plans later in the evening), maybe they were looking for a free drink. I don’t know, but I did witness a fan get his Tom Kundig book, Houses, signed.

After a few glasses of wine I have to say I’m a fan of the multi-colored abstract exterior and for the most part the floor plans. I think they got both those right. Plus there are floor to ceiling windows with good north and south views (at least from the fifth and sixth floors. north units even had a peek-a-boo view of the Space Needle). 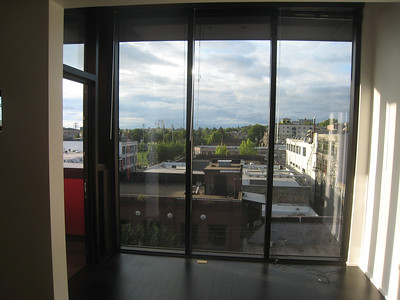 However, I am not a fan of the interior finishes.

The kitchen reminds me a lot of the low-end Veer Lofts kitchen and the Trace North kitchen and in my opinion is a miss. Especially at the price point they’re currently at. The counters look cheap, the appliances don’t fit the style and the cabinets are nothing to get excited about. Plus the used a funky material for the walls around the kitchen. And if you can see where they nailed it on. 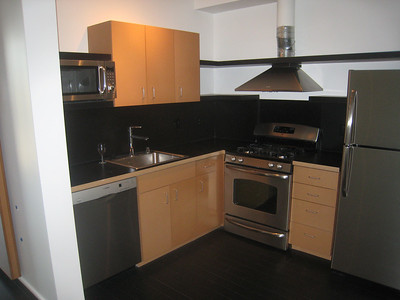 But it’s not just the kitchens. The bathrooms are too white. And the finish and detail quality in general just isn’t there if you look closely. Or not closely in some cases. 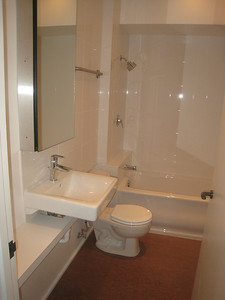 What about the “puzzle door” that you can use to close off the kitchen or your bedroom? It’s neat. But the execution is lacking. For the units I checked it out in it often rubbed where it interlocked with parts of the wall. Or rubbed a wall it was sliding against. Maybe they just need tweaking but it doesn’t seem ready for prime time.

I’m also of the opinion that if you’re going to put a balcony on it needs to be big enough for two chairs and a table. You don’t need much space to move around, but it at least needs to enable a couple to have breakfast outside.

Also, I was shocked they let us walk around with our shoes on. The floors in the penthouse unit the party was in was visibly scratched. Sure they’ll get scratched, over time, by the first owner, but let the owner decide whether they’re going to wear their shoes inside or not.

In conclusion: Great exterior, bad interior. Talking to others the theory is that they started off with a grander vision and dialed back the interiors when the market tanked. Their primary competition is Trace North just a block away so we’ll see how they do.

Here are my 73 photos from the penthouse party and a few units on the fifth floor. And here’s a recent discussion on 1111 pricing on Urban Living.