I was browsing through the recent New York Times Men’s Style Magazine and stumbled upon an article about baseball star Tim Lincecum, Little Big Man in which they write about his Escala condo: 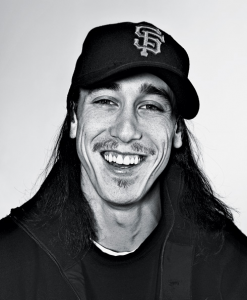 Having spent the previous two off-seasons with his ex-girlfriend in San Francisco, Lincecum put down roots in Seattle after the 2010 World Series, buying a 2,400-square-foot, $1.575 million condominium. When we met there on an afternoon in late January, the fog had lifted for the first time in days. The glass-walled apartment, which is on the 28th floor, offered panoramic views of the snow-capped Cascade and Olympic Mountains.

When I arrived, Lincecum was sitting at his kitchen counter in black sweats and a backward Giants cap, finishing up his lunch, a pizza bagel and potato chips from Noah’s Bagels, one of a handful of takeout spots that provide him with nearly all of his meals. (Sometimes he’ll order two subs from a nearby sandwich shop and stash one in his refrigerator for later.) Lincecum gave me a tour of his place, a version of the man cave: the dude aerie. There were four flat-screen TVs, a guest room that his childhood buddy Drew was squatting in, a pool table, a Red Bull cooler and a “FIFA room,” reserved exclusively for video games. We were trailed by Lincecum’s French bulldog, Cy, named after the Cy Young Award. His other dog, a puppy named Kayo, who wasn’t yet housebroken, had been relegated to the guest-room bathtub.

There were no photos in the article but you can check out a video tour of his in our earlier post about Tim.