And they’re off! Call it a staggered start (since there are already projects in the works) as developers race to get apartments built and meet the increasing demand from renters.

1200 Madison
Curbed Seattle reports that Holland Partners is breaking ground at 1200 Madison today. This First Hill apartment building will have 17 floors, plus:

…look for 237 units in the building and some retail space on the bottom floor. The building should be done by October 2012.

Capitol Hill Seattle (CHS) blog has more on the ground breaking ceremony, plus you can track the progress of this development at Holland Partners’ project site. I hope they keep posting aerial photos of their progress, like this one that shows the bank building being torn down on April 15. 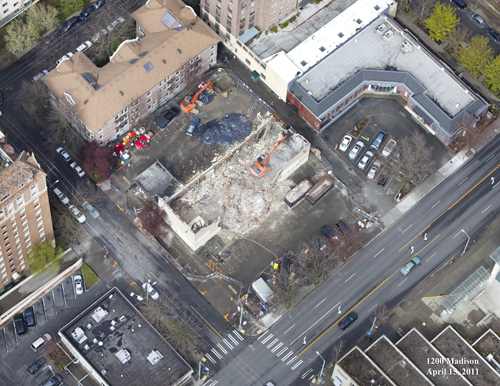 6th and Lenora
The Seattle Times has the story on the two-tower, 654-unit apartment project at 6th and Lenora that is expected to break ground within days. According to the article, Seattle developer, Pine Street Group, obtained permits for the project two years ago but held off until now. 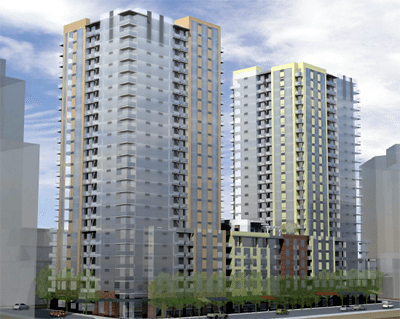 The downtown building will include parking and retail space, but as for the apartments themselves:

Apartments in the towers, mostly studios and one-bedrooms, will average about 700 square feet. The project isn’t scheduled for completion until February 2013, Griffin said, but the units probably would rent for an average of about $1,900 a month in today’s market.

The last time the downtown area saw a project of this size was when Aspira broke ground in 2007. Located at 1823 Terry Ave, Aspira contains 324 apartments in its 37 stories and has a current occupancy rate of 77%.