Make Your Move With FROGBOX

There’s a greener moving alternative in town (and it’s not just because the boxes are green). 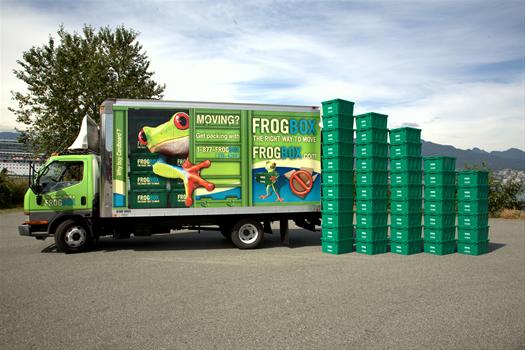 Along the same vein of the recent drive to drop paper coffee cups in favor of reusable cups, you can relocate your belongings in plastic, reusable boxes from FROGBOX rather than the standard cardboard. Seattle (and surrounding areas) is one of 3 regions that FROGBOX services in its recent expansion into the US from Canada.

Here’s why FROGBOX advocates their service as an option:

Every month, more than one million cardboard boxes are used and discarded by people moving in Seattle. Cardboard boxes make up 20 percent of the waste found in most landfills and the average cardboard box is used only twice for moving, whereas a FROGBOX can be used up to 400 times.

Here’s how simple it is:

Orders are placed online at frogbox.com, and then FROGBOX delivers the clean and sturdy containers (and other needed moving supplies) to your front door. You pack and move the boxes, and then FROGBOX picks up the containers at your new home once you’re moved and unpacked.

It’s not just the “green” mover in you that benefits (although that part of you will be happy to hear that FROGBOX donates 1% of sales to frog habitat restoration and company trucks run on biodiesel). FROGBOX saves you from the hassle of finding boxes in more traditional ways: stalking free stuff on Craigslist, soliciting boxes from friends, and the occasional dumpster drive-by. And, more importantly, renting boxes means you are motivated to unpack in a timely manner (you know what I mean, that final box finally gets put away one year later…).