Q&A with A House By The Park

You may have seen the Seattle Times article in April 2011 about Mike Davidson and his recently completed modern home. Over 3 years time he worked with Build LLC to construct a sustainable, energy-efficient Northwest modern home — and we know all about the project because Mike blogged about it. In detail.

The resulting home is pretty amazing as is the blog which is filled with lessons learned, decisions made, and practical insight into the process of designing & building a home from the ground up (and lots of photos such as below). 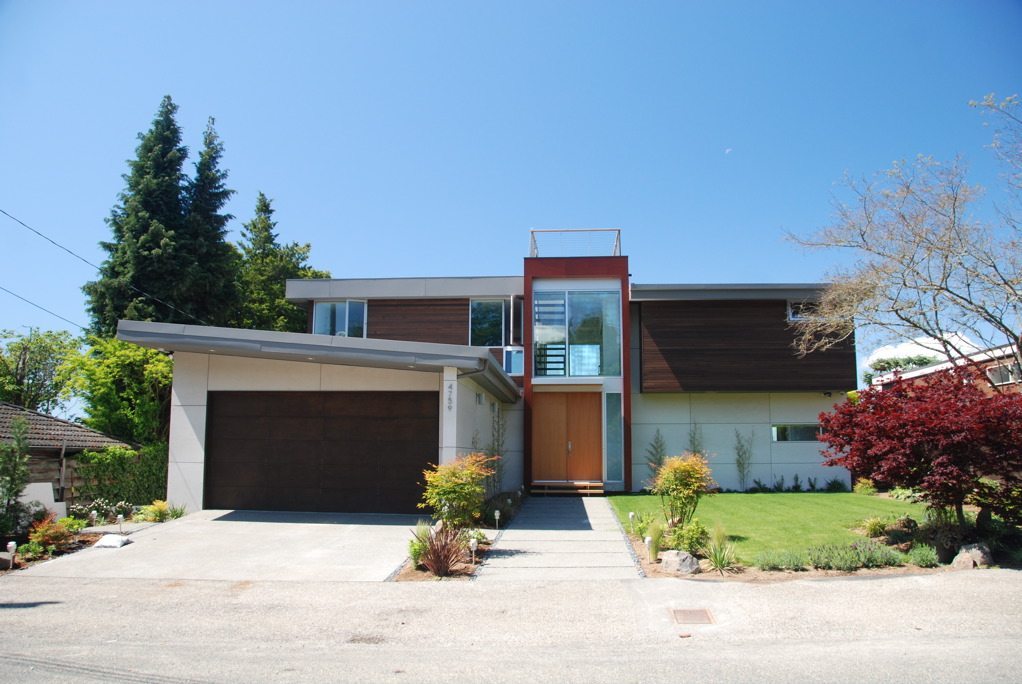 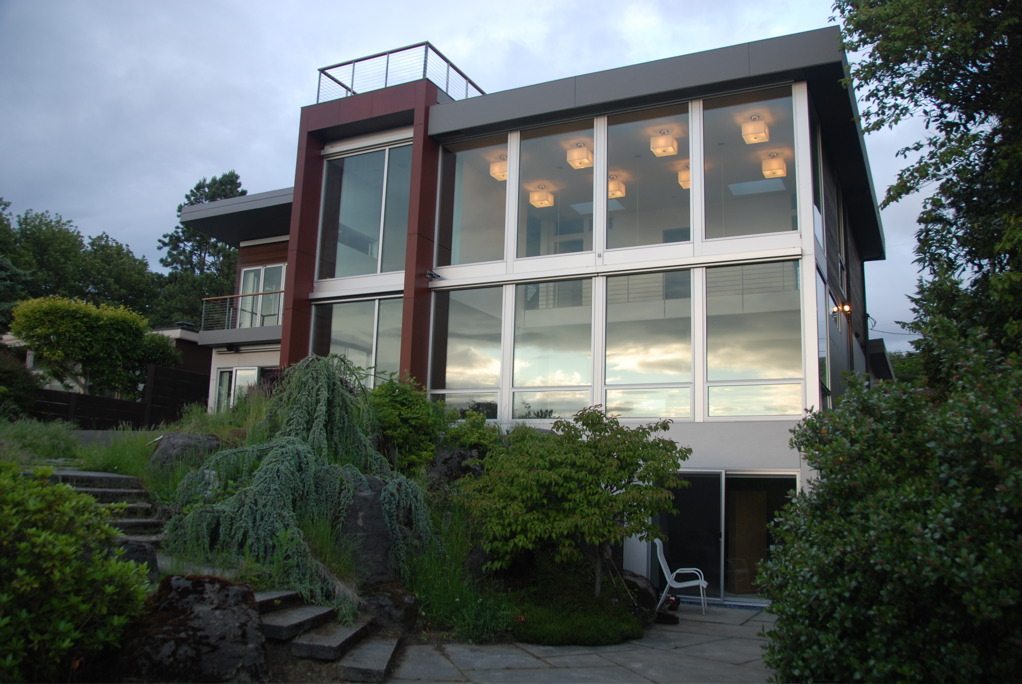 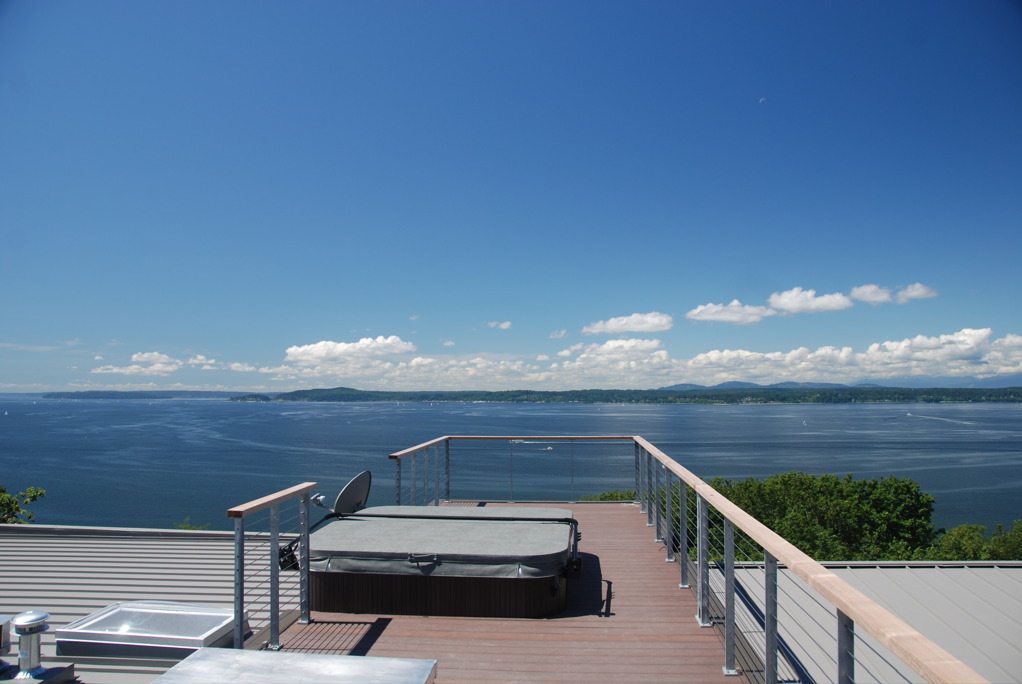 It’s now over a year since the project was completed and Urban Living checked in with Mike to get his take on the great and not so great after he’s had some time to live in his completed, modern home. Here’s what he had to say:

Q: Which is the most enjoyed room in the house? Why?
A: We designed the living room to be the most enjoyable room in the house and it hasn’t disappointed so far. I’ve gone through stages in my life when I’ve watched entirely too much TV, and the point of making the living room much more comfortable than the TV room was to encourage more reading and music listening. The southwest-facing wall of windows gives us a great view of storms as they come in across the Sound as well as close encounters with eagles and hawks. One thing I’m glad the architects insisted on was two levels of lighting fixtures. With cathedral ceilings, you really need a set of lights right up against the ceiling as well as hanging halfway down into the room. It keeps the room glowing evenly throughout.

Q: What feature, fixture, or design element was the most trouble but absolutely worth it?
A: Putting the hot tub on the roof was one of the best decisions we made. Pools are not very common in Seattle because it’s rarely hot enough to actually want to use one, but hot tubs are kind of the opposite. They are great on warm summer nights but even better in the middle of a snowstorm. Putting it on the roof makes it a little trickier to maintain and keep an eye on, but the views are really great. Also, hot tubs are kind of ugly with their covers on so it’s nice being able to stash it in a place where we aren’t always looking at it.

Q: Is there any aspect of the home that gets mixed reviews from your friends (ie. they either love it or hate it)?
A: This is tough to answer because I think friends are reluctant to say anything bad about people’s houses, but I would say it’s probably the induction cooktop. A lot of people see our cooktop and wonder why we didn’t go with gas burners; they don’t realize that induction is in many ways superior to gas. Often times, I will boil a centimeter of water in a pan in about 20 seconds in front of them to disavow them of their misconceptions, but I think sometimes it doesn’t stick. Induction is the future, people!

Q: Is there anything you would do differently now that you’ve had some time to live in the home?
A: Out of the thousands of decisions that go into designing and building a house, I think everyone did a great job of getting almost all of them correct. If I were to do anything differently, I would use oak veneer stained cabinets instead of wenge veneer clear-finished/tinted cabinets. If you want really dark cabinets, staining is simply the best way to get consistent, uniform tones from all of your faces. Clear-finishing is fine if you already like a certain wood’s natural color, but to go dark, you usually need the help of a good stain. Somewhat inversely, I probably wouldn’t try to stain bamboo floors again. Our floors turned out beautifully in the end — they almost look like teak — but it took a resanding and some very precise staining to get to that point. A lot of flooring people refuse to even stain bamboo and now I understand why: it just goes on very unevenly. Had I known this was an issue, I might have gone another route.

Q: Name 3-5 essentials you’d recommend to anyone building a modern home such as yours?
A: The advice I’d give is:

If you are intrigued by some of the topics, you’ll likely find plenty more food for thought in Mike’s blog such as his post about induction cooking or that whole bamboo issue. You’ll also find a complete cost breakdown and timelapse video of the construction (pretty awesome!).

Thanks for sharing, Mike!