I’m a bit of a skeptical guy and rolled my eyes when I heard of the Via6 Scavenger Hunt. I must have been the only skeptic though because it is one of our most “liked” posts ever!

But really what’s an apartment to do when it seems like every day a new apartment pops up? There’s definitely a lot of options for apartment shoppers to pick from. To stand out from the crowd, Via6 certainly had an attention grabbing prize for their scavenger hunt; a year of free rent.

Yesterday they announced their winner, Vinson Doan of Kent, Washington:

“My business, Just Crepes, is down the street from Via6 at Fifth and Wall,” said Doan. “I watched the construction progress, and when I heard about the Scavenger Hunt, I knew I had to compete to live in such an exciting new building. Soon, my daily commute will be just a five-minute walk. As a small business owner, that is golden.”

Even skeptical me smiled reading that a guy living in Kent, but who has a business downtown, would now be living blocks away from his business. Nice to see this budding entrepreneur get a break! Alright, apartment marketers, what are you going to come up with next to top this year of free rent scavenger hunt? 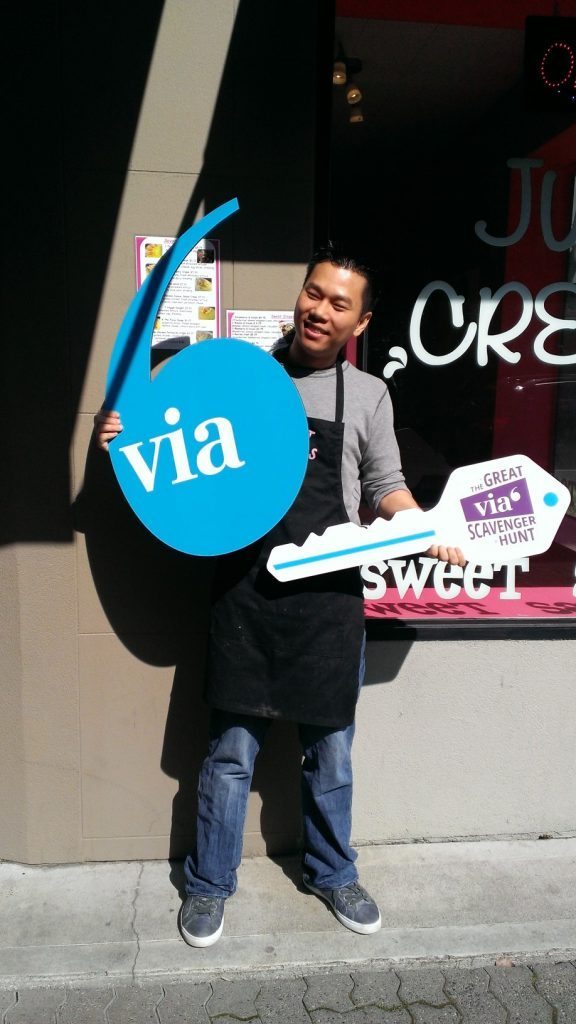 VIA6 ANNOUNCES THE WINNER OF THE GREAT VIA6 SCAVENGER HUNT
Grand prize: Live at Via6 for One Year Rent Free

Seattle – April 1, 2013. Via6 today announced the grand prize winner of its scavenger hunt contest, launched in conjunction with the opening of the new 654-unit apartment project.

Vinson Doan of Kent, Washington, succeeded in winning the nine-day contest by completing all the challenges, tracking down answers to trivia questions and launching an aggressive campaign to gain social media support. As the grand prize winner, he won a year of free rent at Via6, along with moving services by Bekins Moving & Storage, a year of cleaning from Downtown House Cleaning and monthly tickets to Jazz Alley. Seventeen additional players walked away with downtown Seattle-centric prizes ranging from a dining passport to Tom Douglas Restaurants to a year membership at Urban Yoga Spa to quarterly gift certificates from City Kitchens.

“My business, Just Crepes, is down the street from Via6 at Fifth and Wall,” said Doan. “I watched the construction progress, and when I heard about the Scavenger Hunt, I knew I had to compete to live in such an exciting new building. Soon, my daily commute will be just a five-minute walk. As a small business owner, that is golden.”

“We’ve worked hard to create a sense of community at Via6,” said Matt Rosauer, project manager for developer Pine Street Group L.L.C. “We are delighted that the winner is a local entrepreneur who now has the added advantage of living in a great neighborhood close to his business.”
Scavenger hunt players completed three types of challenges to earn points, including creative missions involving a visits to downtown locations, trivia pop quizzes and short-answer questions. The game was produced by San Francisco-based The Go Game. It was the first of its kind for opening a new residential community in the city of Seattle.

About Via6
Via6 is located on the west side of Sixth Avenue between Lenora and Blanchard at the junction of Belltown and South Lake Union. The vertical community has approximately 72 percent open one-bedroom, one-bedroom and one-bedroom plus den units; 15 percent two-bedroom units; and 13 percent studio units. Pine Street Group anticipates that 1,000 people will ultimately call Via6 home. Over 40-percent of the units are currently leased. Via6 is managed by Riverstone Residential.

Frustration with Via6 Fees