Home / Apartments / Downtown / Via6 / Frustration with Via6 Fees

Frustration with Via6 Fees

A reader wrote in frustrated with a recently imposed fee at Via6. They’re not along in being frustrated. Via6 only gets a 3 star rating on Yelp out of 27 reviews.

Thought I’d pass this along. Via6 has done some sketchy stuff since I moved in, but this is definitely the most frustrating/ridiculous I’ve seen. Residents will now be charged to reserve the rooftop rooms we were told we could reserve for free when we moved in. Quite a few residents have suggested alternatives, such as forfeiting the $150 deposit if you don’t keep your reservation, but it seems via6 is sticking with charging the fees.

Overall, I’ve really enjoyed living here. The building has great amenities and the restaurant/coffee shop/convenience store downstairs are definitely a plus. With the units being pretty small, the roof is really a great space to be able to use, probably why so many people are irritated with the new fees.

There has been a lot of frustration with the management company (Riverstone). There were (and still are) issues with the garage when the building opened. Residents were told there would be pet relief areas available on the roof of each tower, but when the building opened, Via6 changed their mind and only allowed penthouse residents to use them. It also took them 6+ months to figure out how to implement an online rent system, then they tacked on a processing fee to use it.

The building is great, but Riverstone just doesn’t seem to care much about the people living in it. 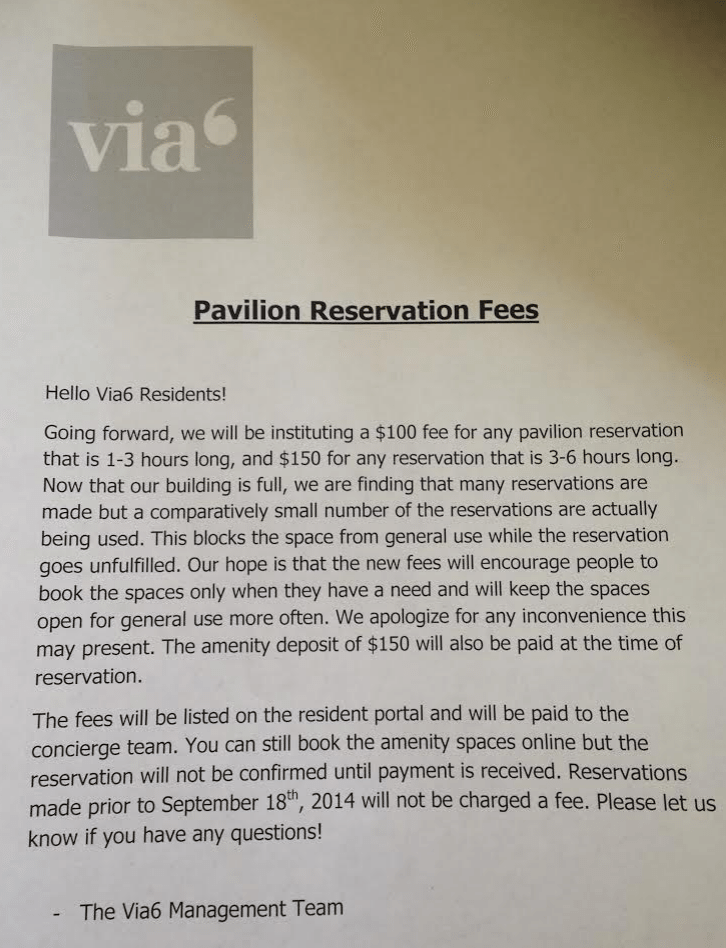