After a road ride out to Alki I only made it to three lofts today before heading out to hockey.

First I checked out #308 upstairs to me at Trace. Looks like a great unit for a single person. Would be a little tight for two though! They didn’t get much traffic through though. I think I was the fifth person to sign in at 3:30.

Then I drove up to 19th Ave Lofts and checked out #206. It’s a nice half height loft unit with polished floors. What’s cool is that the fireplace heats the unit and the gas is covered by the HOAs. The HOAs also include high speed Internet and are surprisingly cheap at $220/mn. The unit also has a deck slightly larger than what you usually see. What I didn’t like was the kitchen cabinets but those aren’t so hard to switch out. And oddly while there is a gas fireplace the range is electric. View all my photos. 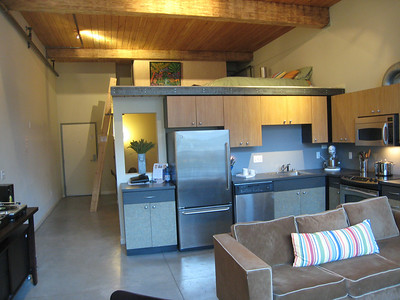 Next up I managed to sneak past the bomb squad to check out 615 E Pike #406. David said about 50% of the folks who came by found out about the tour here.

It’s a great unit. Huge at 2,000 square feet, 2 bedrooms, each has its own bathroom and another bathroom downstairs.

While I wasn’t a fan of the paint the owner did a lot of upgrades since buying it in 2004 including a new master bathroom, exposed duct work in the living room, added more closets and added a number of built in cabinets.

The real wow part of the unit is the master bedroom which has views to the south, east and west.

If I were to buy it I’d likely spend some money on the kitchen and replace the second floor carpet with hardwood. 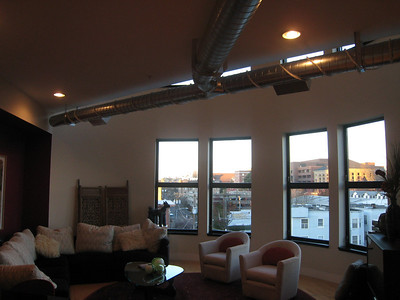