I stopped by the 1521 grand opening this morning. Lots of people were there for the opening, including Seattle mayor, Greg Nickels as well as many of the people involved in the project, William Justen, Susan Marinello, Blaine Weber, Dean Jones,… One couple pulled up in their Maserati just as things got started. 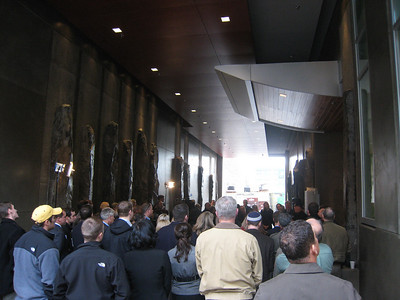 The first speech I caught was William Justen who talked about how this will be the 10th place he’ll have lived in downtown. I did find it funny that he quoted the same NYT article that mocked Seattle condos. He also talked about the community they’re building amongst home owners which started with going to the ACT theater together with wine and cheese beforehand.

I’d love to get inside 1521 so if any of you are homeowners I’ll gladly exchange a housewarming present for a tour. Until then, all I can really say is that I like how it looks from the inside. Certainly looks better from the outside than the Four Seasons.

View all the photos including professional photos from 1521 of the lobby. Here are the official grand opening photos.